Graduate students from Aalborg University’s department of Sports Technology investigated a novel analysis approach to estimate the internal loading on the lumbar spine exclusively with input from Xsens MVN Analyze.

Low back pain is the most frequent work-related musculoskeletal disorder and has been associated with work involving manual materials handling tasks, such as heavy lifting. Heavy lifting imposes high compression forces on the spine, particularly around the at L4-L5 vertebral discs, which can result in fractures, degeneration, or permanent injury to the intervertebral discs and vertebral endplates (Brinckmann et al. 1998). However, the assessment of spinal loading in the field is challenging and rarely done due to the invasive methods involved. For this reason, several other methods have been implemented in an attempt to estimate these forces, including anatomically detailed, computer-based musculoskeletal models (Dreischarf et al. 2016). Until recently, accurate musculoskeletal models would involve camera based motion capture and floor-mounted force plates that are expensive and inconvenient to use in the field (Faber et al. 2008). Recent advances in ambulatory motion tracking systems, such as with Xsens MVN Analyze, allow the application of full-body motion capture in any working environment with minimal impact from magnetic distortions (Filippeschi et al. 2017). Kinematic input to a musculoskeletal model using orientation estimates from full-body ambulatory inertial motion capture (IMC) measurements have already been tested with inverse dynamic calculations using a ground reaction force (GRF) prediction approach (Karatsidis et al. 2018). However, such approach has not yet been validated during typical manual materials handling tasks. Therefore, the aim of the present study was to validate the estimation of L4-L5 spinal forces based on a musculoskeletal model driven exclusively by IMC data and GRF prediction during various lifting and transferring tasks. To achieve this, we compared the joint reaction forces at the L4-L5 discs to an optical motion capture (OMC) and force plate-driven musculoskeletal model. This approach will help determine if musculoskeletal models driven by IMC data and predicted GRFs can be used to estimate spinal loading in the field.

13 healthy subjects performed three trials of four different lifting tasks including symmetrical lifting, asymmetrical lifting, and load transferring. The lifting tasks involved lifting a 10 kg box from the ground to an upright position, to a table in front of the subjects, and to a table placed asymmetrically to the side of the subject. Load transferring involved moving a 10 kg box between two tables. Motion analysis was performed using the OMC and IMC systems simultaneously. OMC included full-body trajectories of 42 passive reflective markers measured with 8 infrared cameras sampling at 120 Hz. IMC were measured using 17 inertial measurement units (IMUs) sampling at 60 Hz. GRF and moments were measured using three floor-mounted force plates, one placed beneath each foot and one beneath the box, sampling at 1200 Hz. All measurements were synchronized in Xsens MVN Analyze.

The musculoskeletal models were developed in the AnyBody Modelling System (AMS). OMC-MGRF was considered the golden standard, as it is the most commonly used system for providing kinematic and kinetic input to musculoskeletal models. The IMC-PGRF model was scaled according to the joint-to-joint distances between segments contained in the .bvh files. Virtual markers were introduced on the stick figure created from the .bvh data and the musculoskeletal model in AMS to perform marker tracking between the two models (Karatsidis et al. 2018). GRF and moments were predicted for IMC-PGRF and OMC-PGRF models using a method similar to that of previous studies (Karatsidis et al. 2018; Skals et al. 2017).

From the inverse dynamic analysis, axial compression force and anteroposterior shear forces at the L4-L5 discs were computed. Forces were normalized to percentage body weight (%BW) and moments were normalized to percentage body weight multiplied with body height (%BW∙BH). Trials were averaged within each participant for each lifting and transferring task. Individual data series were time-normalized to 100%, representing the cycle where the load has no contact with the ground floor. 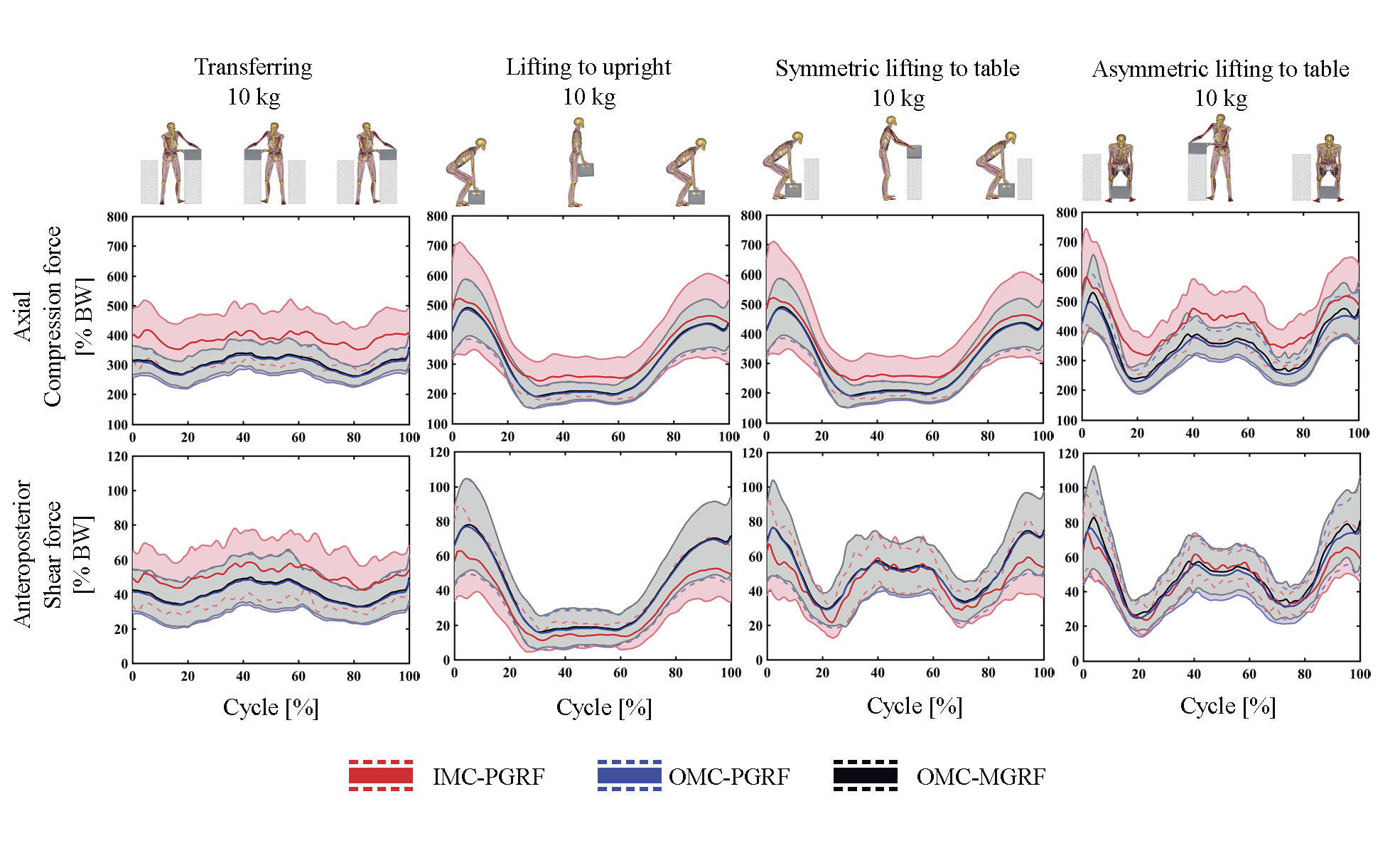 The accuracy of predicted GRF&Ms as well as estimated L4-L5 joint reaction forces were investigated using an inverse dynamic musculoskeletal modelling approach based on IMC data. The analysis showed that IMC-PGRF can be used to estimate compression forces and anteroposterior shear forces at L4-L5 vertebral disc during standard manual materials handling task with high accuracy compared with OMC-MGRF and OMC-PGRF. The inaccuracies associated with IMC-PGRF have been investigated and can be used as considerations in future studies. The method can be used in the field to estimate musculoskeletal loading during simple manual materials handling tasks. Accurate estimation of joint reaction forces between the vertebral bodies using such a musculoskeletal model as an analysis tool may revolutionize ergonomic analysis in the field.

Brinckmann, P. et al. 1998. “Quantification of Overload Injuries to Thoracolumbar Vertebrae and Discs in Persons Exposed to Heavy Physical Exertions or Vibration at the Work-Place. The Shape of Vertebrae and Intervertebral Discs - Study of a Young, Healthy Population and a Middle-Age.” Clinical Biomechanics 13(Suppl. 2):1–36. 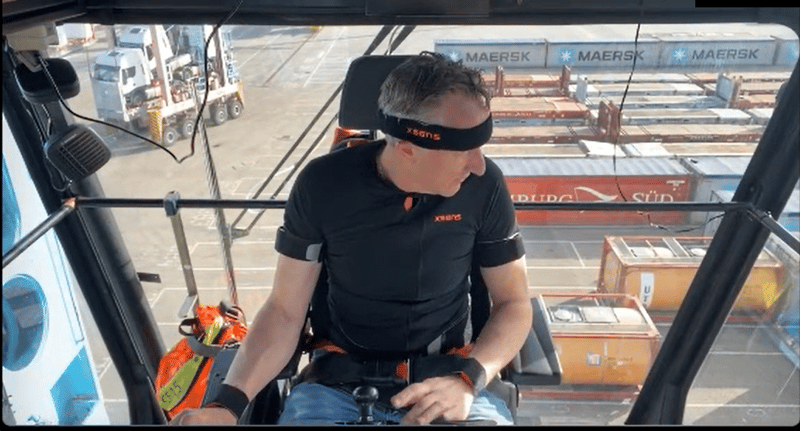 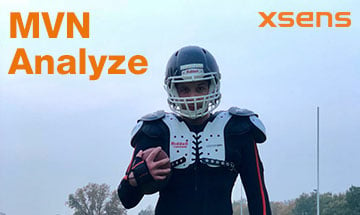