Sassybot is a young indie game development studio that aims to create unique entertainment games. The company was founded in 2012 and currently consists of Elwin Verploegen and Tino van der Kraan. Together with Prof. Mata Haggis, Sassybot has developed and published the award winning title "Fragments of Him" for PC and Xbox One with a PS4 release currently in development.

Fragments of Him
Fragments of Him is an interactive narrative about love, loss, and hope. It tells a story about Will, a regular guy whose life is cut short by a tragic car accident. Who this man was and what he means to those he leaves behind is seen from the perspectives of his ex-girlfriend, his grandmother, and his partner in life. The player is present, not as a physical character, but rather as an invisible director who dictates the pacing as you experience the thoughts and views of these characters. Fragments of Him has been lauded and widely covered with Playboy calling it “… one of the smartest depictions of death in video games …” and Polygon writing “… I'm so thankful that Fragments of Him is coming into my life right now”.

Xsens
One of our production challenges was to find a cost effective solution to pose and/or animate our characters. During pre-production we looked at several suitable and affordable solutions for motion capture and after trying several time consuming and sometimes frustrating solutions Sassybot got our hands on an Xsens MVN suit. A single suit allowed to record over 250 motions for 5 key character types and various filler characters over the course of 3 working days after a very brief learning curve. A special thanks goes out to Ralph Palmer and NHTV Breda University of Applied Sciences for their support in the recording sessions.

The recording sessions came with challenges of their own. One challenge in particular was using a single suit and actor to record a diverse character cast composed of males and females of varying heights and ages that sometimes even have to act which each other. That actor ended up being Tino van der Kraan from Sassybot. Fortunately, with Mata being the director, the resulting data was convincing enough to represent the entire cast.

There was one case in Fragments of Him where an adult had to playfully swing a child around. This was an interesting challenge with a single suit. The solution was to first record the adult, swinging around a backpack filled with enough weight to resemble a small child. This would emulate the shifting center of gravity. Then Tino would act as the child by hanging from a ledge and swinging the torso and legs as if he was being swung around. Finally, they would merge the results using Autodesk MotionBuilder by attaching the root of the child to the shoulder of the adult and attaching the hands together using an IK system.

Another interesting challenge was doing a group hug of three characters with a single suit. The solution was to mocap each of the characters and have supporting actors acting the other parts. Because of the size differences of the characters the support actors had to adjust their acting height. The interns Kaylee Mulder and Maik Bentlage could help,out here. The process and result of this challenge can be seen in this video: 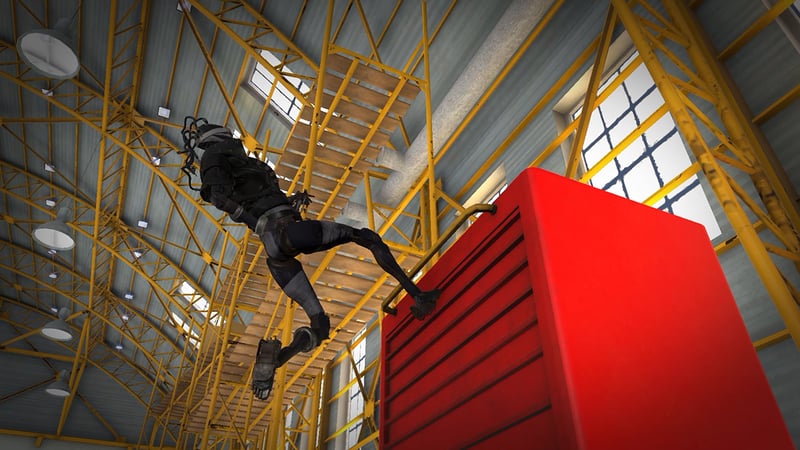