When Ergonomic experts, ViveLab, were commissioned by Secret Hungary Ltd. to conduct a survey at their production line the results had a far-reaching impact. Not only was there an optimization of the production process but their analysis also informed a workstation redesign and a reorganisation of workflow. As a result, the efficiency and output improved dramatically helping the factory cut costs. Find out how:

The core aim of the survey was to check the efficiency of workloads, along with the impact of processes on staff and to eliminate bottlenecks – all in order to secure compliance with the standard EN 1005-4.

Throughout the project, the team reviewed the work instructions, monitored workflows, captured how workers moved and interacted with the assembly line. It also measured the cycle time for each task to get a full view of the operation.

The results of the survey and optimization recommendations were then simulated and analyzed with the ViveLab Ergo software, allowing comparisons between the existing and the planned work processes.

This was conducted in 4 steps:

During the screening, the workstations on the production line were categorized according to the intensity of workloads along with the seriousness of health effects and involved risks.

This first phase helped the ViveLab team assess the overall state of the production area as quickly as possible, see where the problem is most acute, and where corrective measures will be most effective so they can be prioritised.

This was reviewed with the client and they agreed on the selected areas to investigate further with motion capture equipment and analysis using ViveLab Ergo.

The movements of the workers on the pre-assembly line were captured with 17 wireless inertial Xsens sensors strapped to their bodies. Unlike optical sensors, inertial motion capture doesn't need a camera system, and, unique to the Xsens Motion Capture technology, electromagnetic waves do not distort data.

The sensors could be calibrated quickly and easily without hindering the production and didn't impede or influence bodily exertions – this meant that workers could move naturally, resulting in a recording that accurately reflected a typical working day.

Based on floor plans, the team built up a digital model of the pre-assembly line. After they had constructed the environment, they created virtual human characters and assigned each character the relevant motion files that had previously been captured with the Xsens suits. As a result, they had a working model of the pre-assembly line with the motion associated with the work activity there. 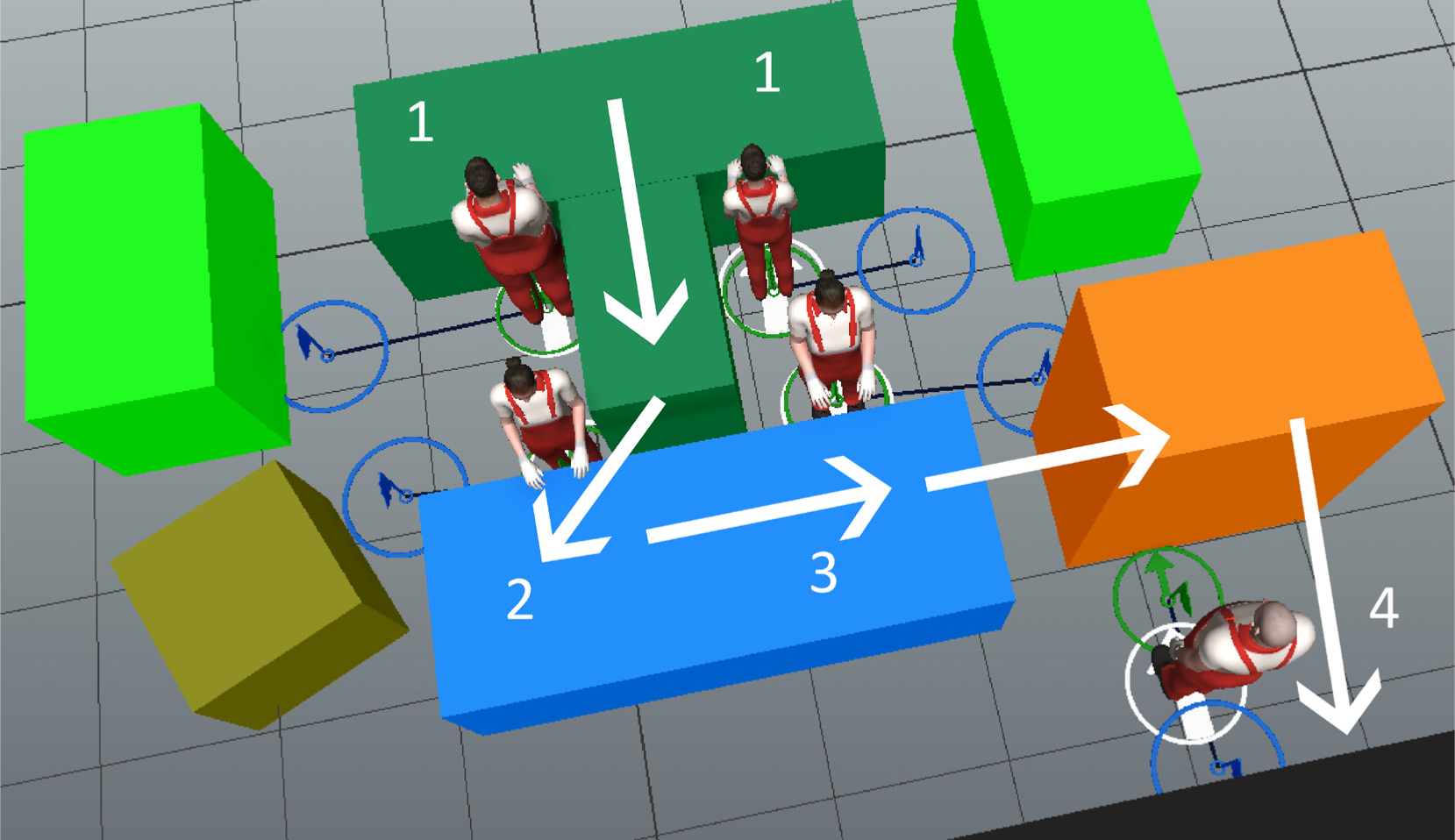 Thanks to inertial motion capture, the built-in analyses methods can also detect critical movements and postures that might not have been noticed prior, or that might have remained hidden because of potential screening effects. ViveLab then exported the analysis reports that highlighted positions—with relevant angles and with an accuracy matching hundredths of a second—that need to be adjusted to reduce the workload of employees.

The software evaluates the postures of the employees according to several built-in ergonomic analysis tools: RULA, OWAS, NASA-OBI methods, ISO 11226, EN 1005-4 standards, Spaghetti Diagram and Reachability Test. The software checks whether the load on each body part exceeds the acceptable limit.

The team examined different kinds of health-harming postures that occur often, analyzing the movements that can significantly slow down the work process. While examining motion, they identified movements that were not necessary for the successful completion of the task and looked for ways to avoid them. As a result, cycle time was reduced and it became possible to speed up the conveyor belt.

One of the biggest problems revealed in the report was the impact of having a lack of space. Consequently, it was difficult to access the different and overt parts of the workstations, affecting the researcher’s ability to find a suitable place for the supply containers. This resulted in employees hampering each other’s movements with the tools and fittings becoming cumbersome.

The report, that was exported from the software, presented the movements that were found to be physically demanding or avoidable. This report, which is based on accurate and objective measurements, provides essential data to the design team of engineers and ergonomics experts. On this basis, our specialists developed an action plan that included several individual, organizational and technical proposals. The team then recorded the motions in the new layout and simulated the new workflows.

Virtual validation without a prototype before the implementation, with Xsens MVN Analyze

Instead of working on two larger workbenches as used previously, each employee works at his own height-adjustable desk on the new pre-assembly line. This allows them to work at a table suitable to their own height. An advantage to this solution is that the workers are able to carry out their tasks in a comfortable manner whilst reducing fatigue. As such, the muscles in the neck, shoulders and spine of the worker are less strained.

Informed by the analysis, ViveLab recommended that employees are given a chair so that they can alternate between standing or sitting positions – this is also supported by the height-adjustable desk. The chair they use should also have wheels that can easily roll closer to the container or conveyor belt. 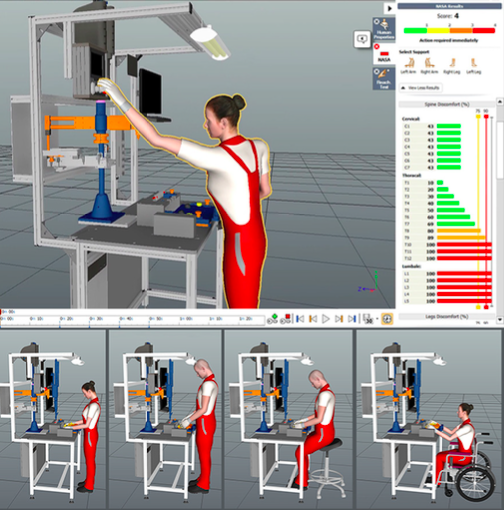 It was proposed that the installation of roller bar conveyors between the different workplaces for the transfer of items to be assembled in an effort to reduce workplace injury.

One of the most important effects cited as a result of the corrective measures was reduced cycle time in the pre-assembly unit. It became possible to speed up the conveyor belt as requested by 15%; reducing the time required to produce the final product. This faster production process increases the annual revenues of the company by approximately €250,000.

Thanks to the reorganization, one employee instead of two can fulfill the task at the cable box assembly workstation. As a consequence, the spare worker can be moved to another area where there is a workforce shortage. This is will save approximately €15,000 in annual wage costs for the company.

In addition, supplying the line with raw materials has become much smoother. The space requirements of the workstations have been reduced from 41m2 to 24m2.

ViveLab tested the redesigned workstations with the ViveLabErgo software according to the same ergonomic analysis methods as we had done in the case of the original workplaces. The report exported from the software details the analysis results for each workstation. From this document, the RULA analysis results are compared – however, the financial gain achieved by protecting the health of workers is harder to quantify. Preventing musculoskeletal disorders also means financial savings, as the cost of sick leave days is significantly reduced.

Like the original workstations, the redesigned ones were examined and tested according to the ISO 11226 and EN 1005-4 standards. Every analysis method proves that the redesigned workflow is much less burdensome for employees.

The example presented here demonstrates how, based on the results of a detailed ergonomic study, a successful redesign of a workstation (or of a complete manufacturing unit) reorganizes the workflow and can improve the efficiency of an entire factory. Even with fewer workers, production is faster and production space is reduced. However, it is invaluable that the employer has done everything he or she can to prevent musculoskeletal disorders. As a result of the changes implemented, workers will be less exhausted by the end of their shift and risk of musculoskeletal and other problems are reduced. In addition, ergonomically designed workplaces help ensure that the workforce feels safe and comfortable within their roles.