Xsens MVN is an easy to use, system that captures full-body human motion in any environment. It is based on small, unobtrusive inertial and magnetic sensors combined with advanced algorithms and models. In this blog we will be looking at how some challenges in inertial motion tracking were overcome. 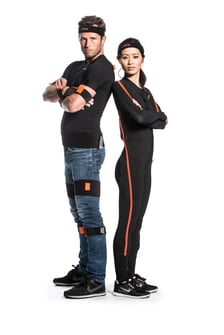 OVER the past decade, inertial motion capture has been used by a growing community and in a wide range of applications varying from character animation for movies, games, augmented reality and virtual reality, as well as human motion measurements for biomechanics, rehabilitation, ergonomics sports.

Segment positions and orientations are typically estimated by applying the result of a sensor-to-segment calibration procedure to the corresponding sensor orientation and applying it to a (scaled) biomechanical model of the human body.

The new engine combines the data of all motion trackers with advanced biomechanical models resulting in an immunity to the effects of magnetic distortions. In addition, the sensor to segment calibration procedure no longer relies on the data from the magnetometers, allowing the calibration to be performed anywhere. Finally, although the assumption of a known pose (N/T-pose) together with a predefined scaling model is still used in the current version of the engine, the current framework allows inclusion of customized models.