William Shakespeare’s The Tempest can be seen onstage with all the wonder and magic that the author dreamed of. This play innovative play is collaboration between the Royal Shakespeare Company (RSC), Intel and in association with The Imaginarium Studios. The performance includes a digital onstage character, made possible through the use of Xsens MVN motion capture technology.

During the play, one of the main characters, Ariel, morphs from a spirit to a water nymph to a harpy. This transformation is achieved by motion capturing actor Mark Quartley with Xsens. The actor’s movements are projected onstage and in the air as a digital avatar. The flexibility of the Xsens technology enables the actor to interact directly with cast members in human form, while being able to transform live on stage every night during the play’s run.

The data is run through Autodesk’s MotionBuilder software, and from there into Epic’s Unreal Engine 4. The video output is then sent to d3 servers powered by Intel’s® Xeon® processor connected to the RSC lighting desk, which in-turn controls 27 projectors located around the stage.

The play has run for several months at the RCS theatre in Stratford-upon-Avon, a second run will start in June 2017 at the Barbican Theatre in London. 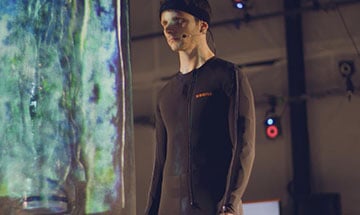 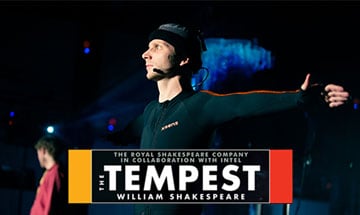