Foraus Inc. is a motion graphics and media entertainment studio that creatives large-scale graphics for live shows. With the capabilities to design bespoke software and hardware solutions, the studio has produced mind-bending displays, stage settings and installations for major companies such as Honda, Disney, and Youtube. With performance capture steering some of Foraus’ animations, we sat down with Travis Poe, Founder of Foraus, about his experience using Xsens MVN Animate to create live-action, motion graphics.

Travis initially studied Computer Science and Graphic Design at Laguna College with the aim to build interactive web-experiences. However, he had to take a sharp pivot when the iPhone came out and brought an end to Adobe Flash:

"I wasn't sure where to go after Flash got killed off. But I knew I wanted to continue to create technology-led visuals. Fortunately, I met Martin Brinkerhoff while I was still studying. Martin does a lot of live shows which he got me involved in. We were creating visuals for Disney parks, arena concerts, corporate conferences, and other large-scale events, it was a great introduction. I was making a lot of visual experiments and inventions in college, and Martin was keen to incorporate some of them into his shows. It was a great collaboration.”

“Since then, I've worked for over 40 Disney shows, everything from concerts, auto shows, product launches, and permanent installs such as YouTube—it’s kind of all blown up! I started Foraus 5 years ago while working with Martin, we’ve worked on some great projects ever since.”

How do you approach the projects you work on?

“It really depends on the client. Sometimes, we’re given a full concept with detailed storyboards and other times, we make storyboards from scratch and create the set design—pretty much the whole concept.”

“For example, Disney had a huge amount of creativity in-house that helps produce the story. Other companies that don't have that on-tap often want full development from us, it really depends.

“We started to work with body mocap around five years ago with optical solutions before taking on Xsens MVN Animate about 18 months ago. It became a really good way of creating animatics and storyboards quickly with animation. We’re able to have someone act out what we thought the story should be. Then—because we actually had the data—we could use it to help create the final show. Clients could then be more involved with the development of their project.”

Do you experiment outside of project time?

“We carve out a good amount of time for R&D work that’s not project-related, this provides us with total freedom. We can create all kinds of art and experiments—such as the projects we share on our Instagram—in just one to two hours.”

“Some of it's a little rough and unrefined, but it’s good enough to take the concept to clients and develop it into something that's show-ready. It's been a great way of generating interest in new projects—we've really got a lot going on at the moment!”

“We've been finding that mocap driven experiences can be more unusual and get the most attention. Real-time is impressive and inspires us with more ideas for what people want. In my experience, having a giant avatar behind the person who's driving it really excites people.”

How does using Xsens differ from the optical solutions you’ve used before?

“MVN Animate saves us a lot of data clean up time because the data we get is already good quality. The clean up we do apply is also comparatively quick—this is especially important because sometimes, only one person is able to manage that. It’s also quicker than optical systems, and you don’t have any occlusions when using the suit which is very important.”

How do you use Notch with Xsens?

“Notch is a popular tool for creating realtime visual content. We were starting to use Notch a lot for concert driven graphics from IMAG but wanted to see if we could experiment further using it with mocap.”

“Xsens gave us a demo of their suit and we were impressed with the feet on the animated avatar. As the suit moves around, the feet stay locked to the ground. With other suits, there's drifting in the feet and that's an issue for particle generation. It's nice to have a certain level of control with particles—when there's popping or other issues it really lowers the quality. MVN Animate has really helped to improve the level of graphical quality we can create with Notch, and with that, it gives us a tool that we can create in real-time with the client.”

What are your overall thoughts on Xsens MVN Animate?

“We've tried quite a few other similar solutions that just can't provide data that’s as accurate as Xsens—we need something that speeds up our processes. Xsens means you can 'capture and move on'. The results look just like optical and the data is amazing.”

You can find out more about Foraus’s upcoming projects here. We’re looking forward to seeing the extent of the studio’s use of Xsens for live motion graphics in the future.

During the trial period you will have a fully functional version of the software, including pre-recorded data. 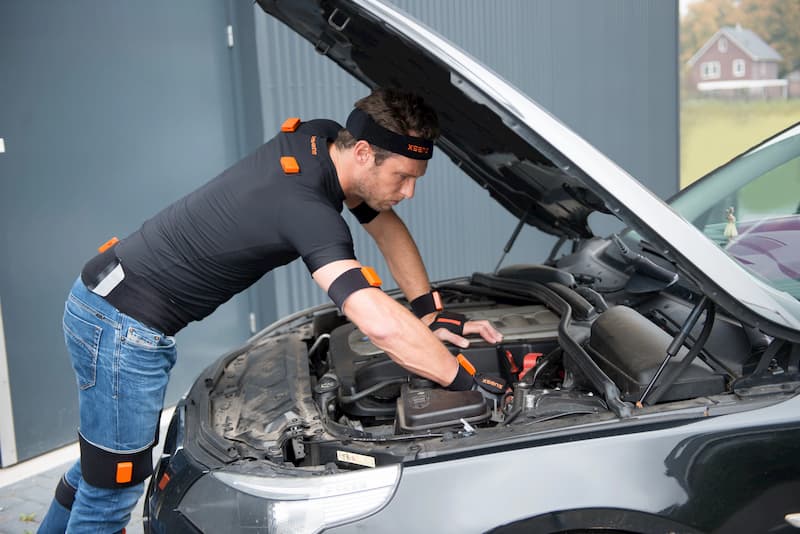